Training and Gender Equality event as a means to promote equality 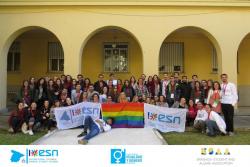 The Federation has created this event to promote equality and know how to respond to situations of discrimination.

During the week of 15 to 17 February, ESN Vigo assisted to the Training Event and Gender Equality . This act is designed to train volunteers ESN on issues concerning equality, gender and LGTBQI +. All this with the aim to further strengthen egalitarian values in sections.

The event opened on Friday 15 at 16:00 in the auditorium of Building Students of the Universidad Complutense de Madrid. Those responsible for conducting the opening ceremony were Esteban Sanchez (delegate of the Rector for Diversity and the Environment), Berta Cao (advises on Migration and Refugees in Area Equity, Social Rights and Employment of the City of Madrid), Ignacio Tejero ( technician equality Gender equality Unit of the UAM), Nils Papio (president of ESN Spain) and Susana Martinez(Formative CoHead Event Equality and Gender). A total of 58 volunteers from the different sections of the Federation attended. Including 3 international volunteers they came from Belgium, France and Turkey.

The institutions that were responsible for training our volunteers were Likadi , Diversity Unit of the Complutense University of Madrid , Arcópoli , Women in Equality , Spanish Red Cross , Aecid and Area Gender Equality of the Autonomous University of Madrid . By collaborating different dynamics and workshops focused on awareness and prevention of sexist behavior they were made.

This training aims to provide the knowledge to create internal protocols against discrimination; increase relationship with universities and their respective areas and gender units and diversity; know the sociocultural reality of different countries; and make sections more LGBTQI + friendly.

To carry out this event has benefited from the contributions of companies and public and private institutions. This event has been helped by Spanish Red Cross , Xceed , Lycamobyle , Red Bull , Universidad Rey Juan Carlos , La Lupe and the Complutense University of Madrid .